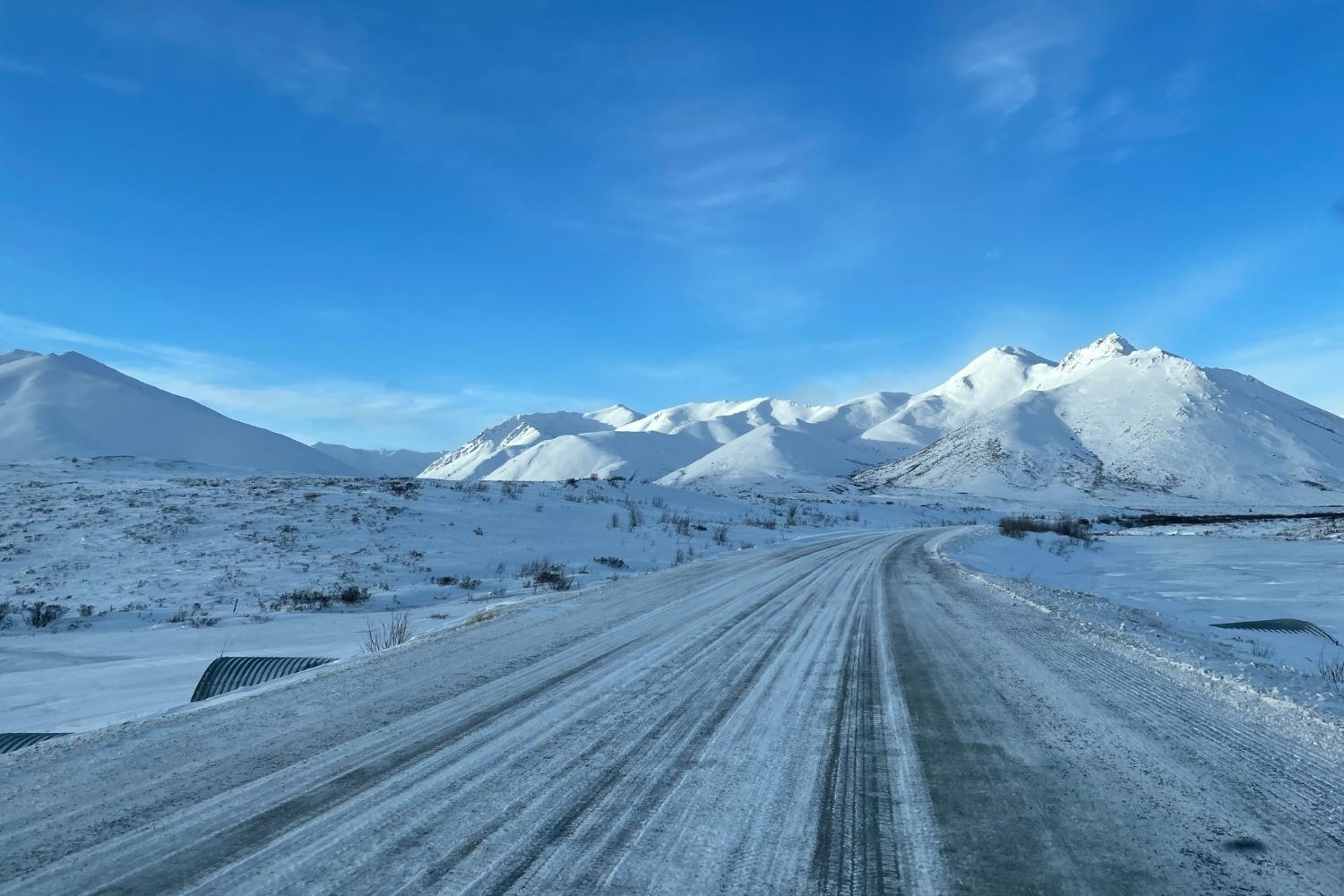 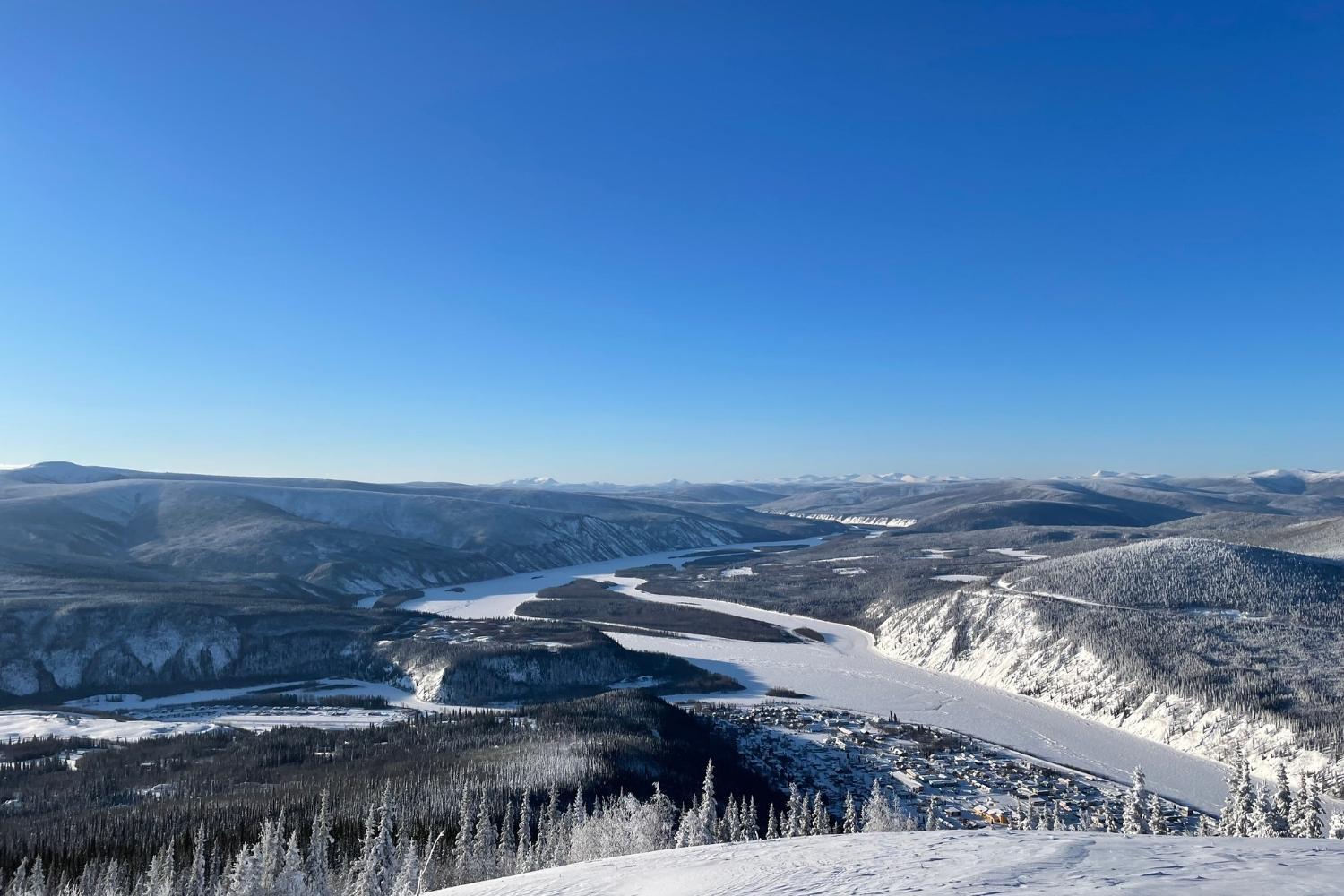 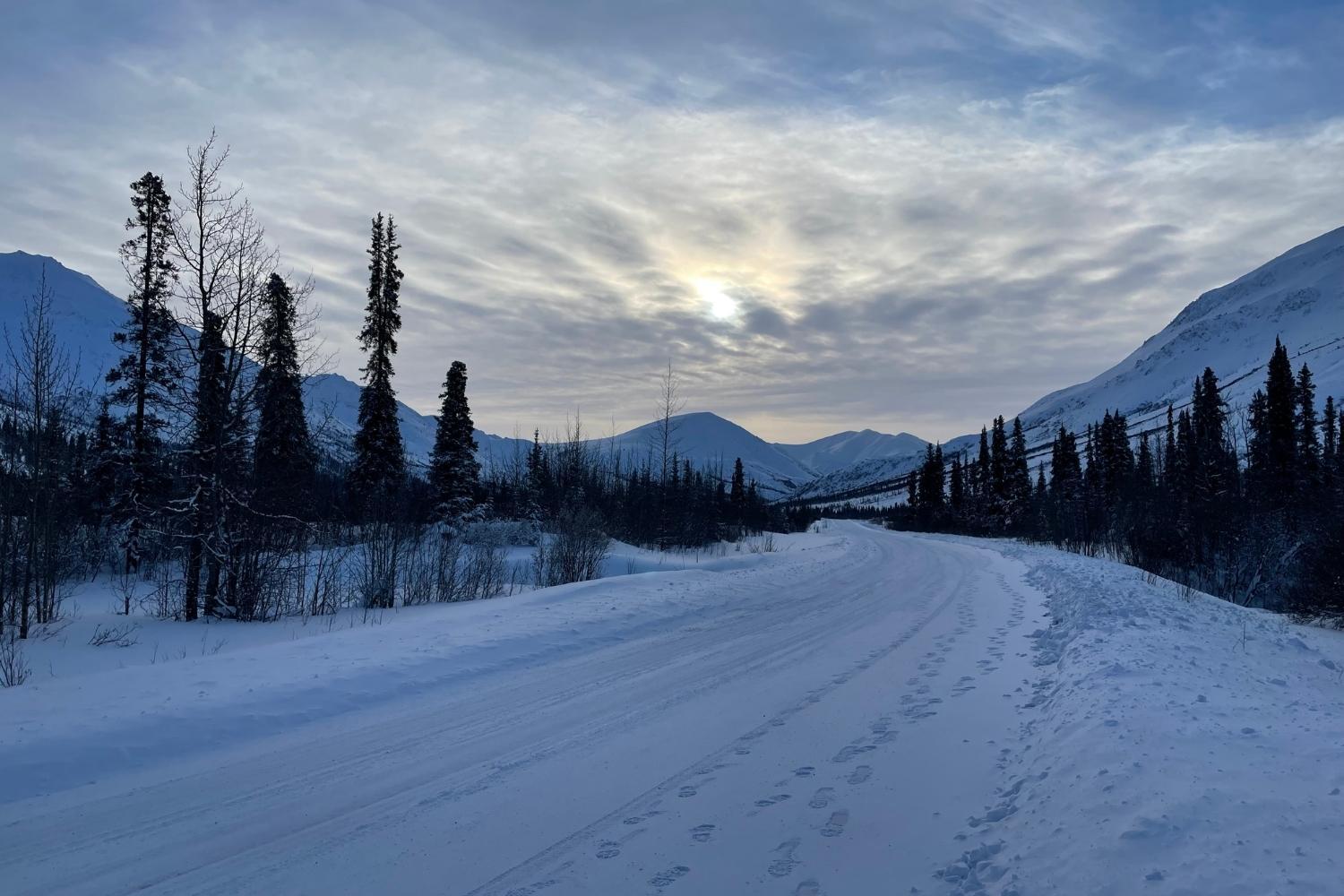 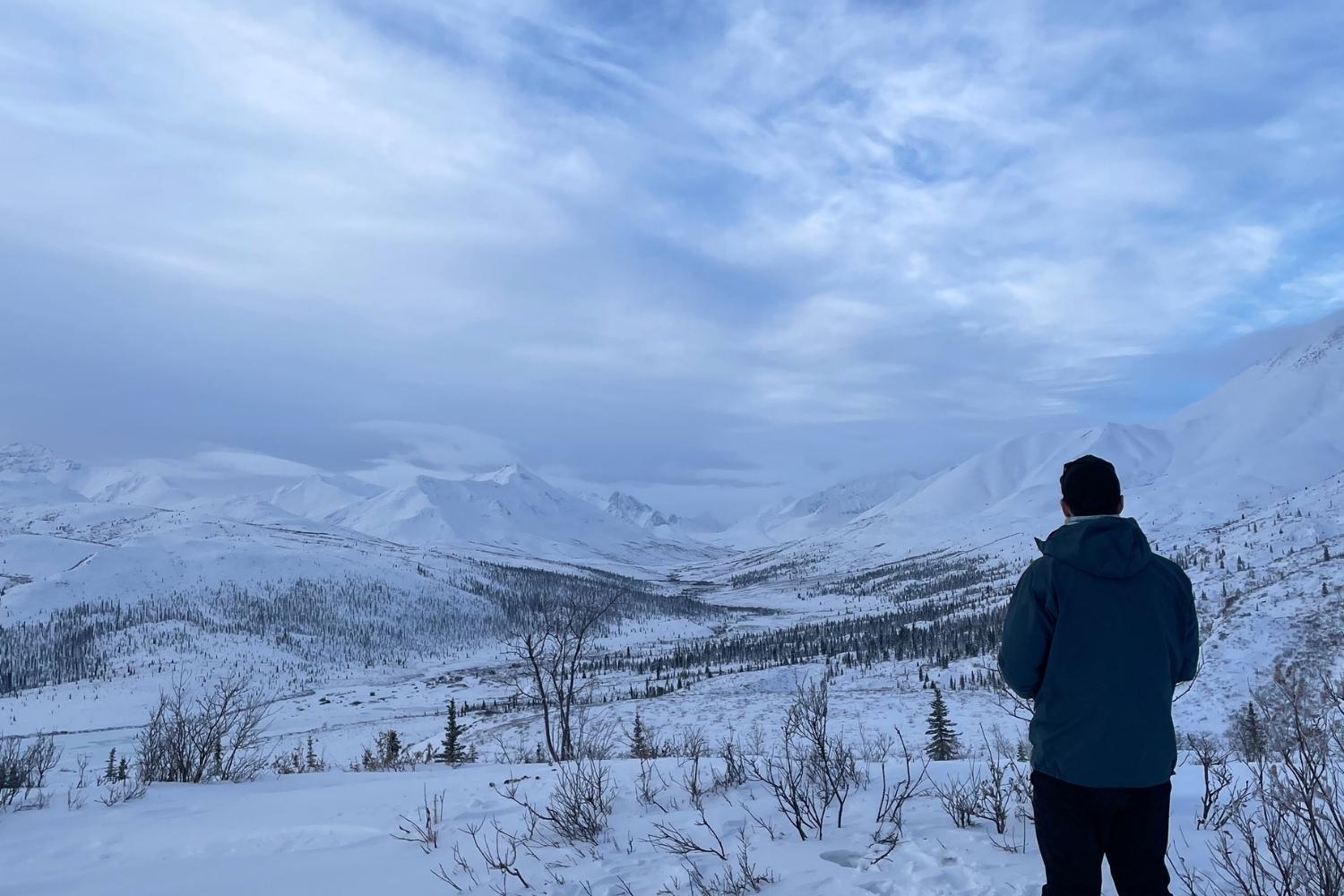 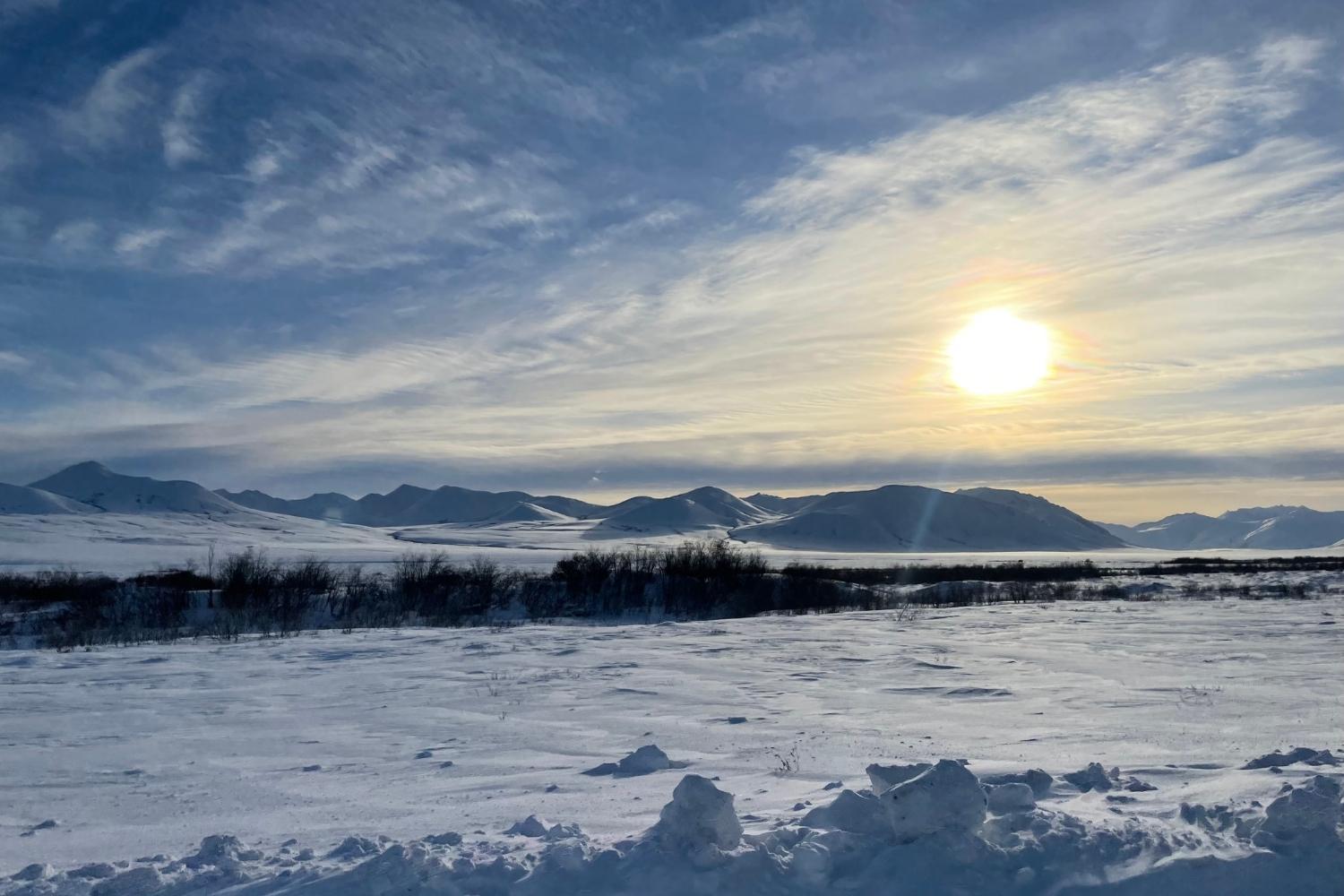 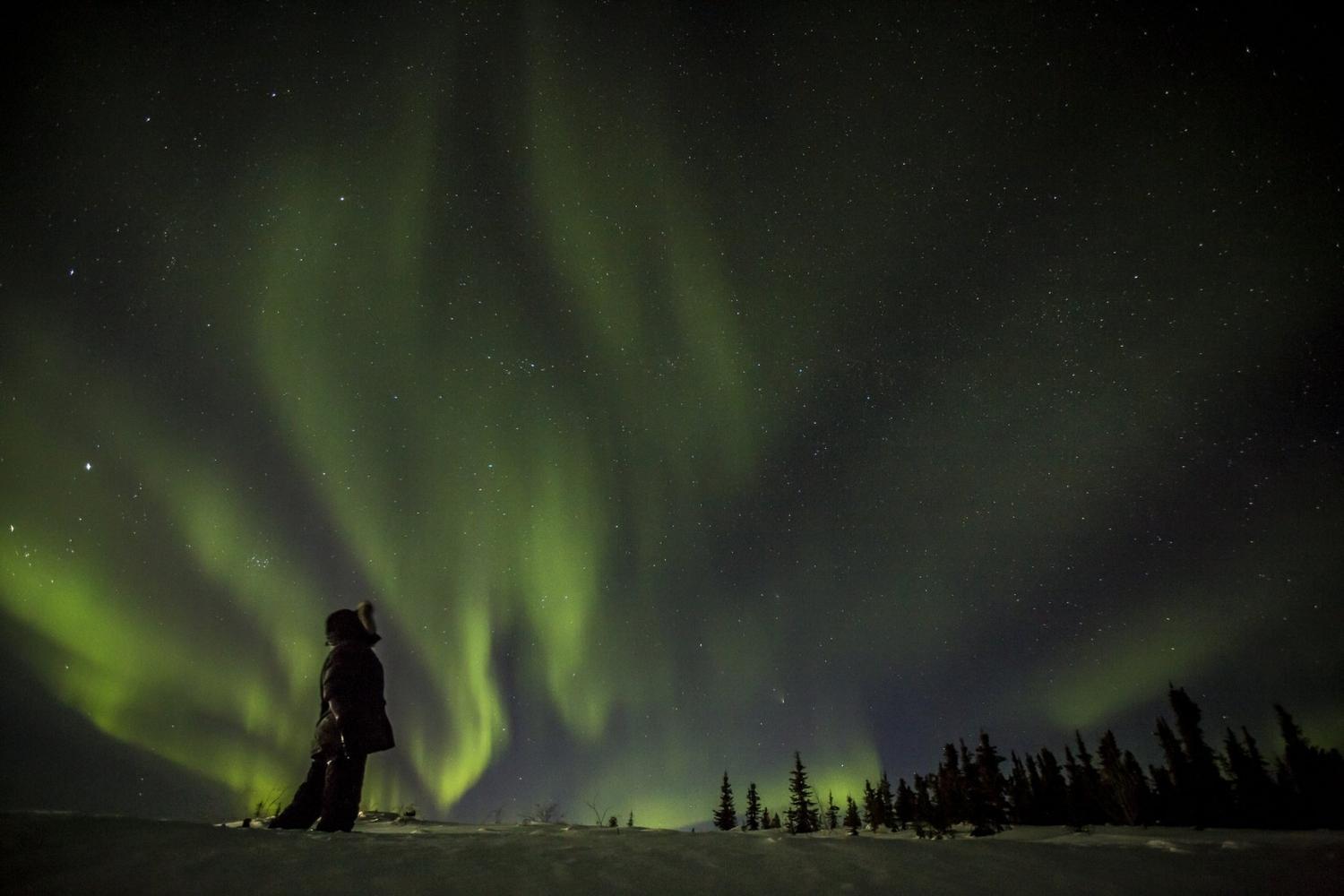 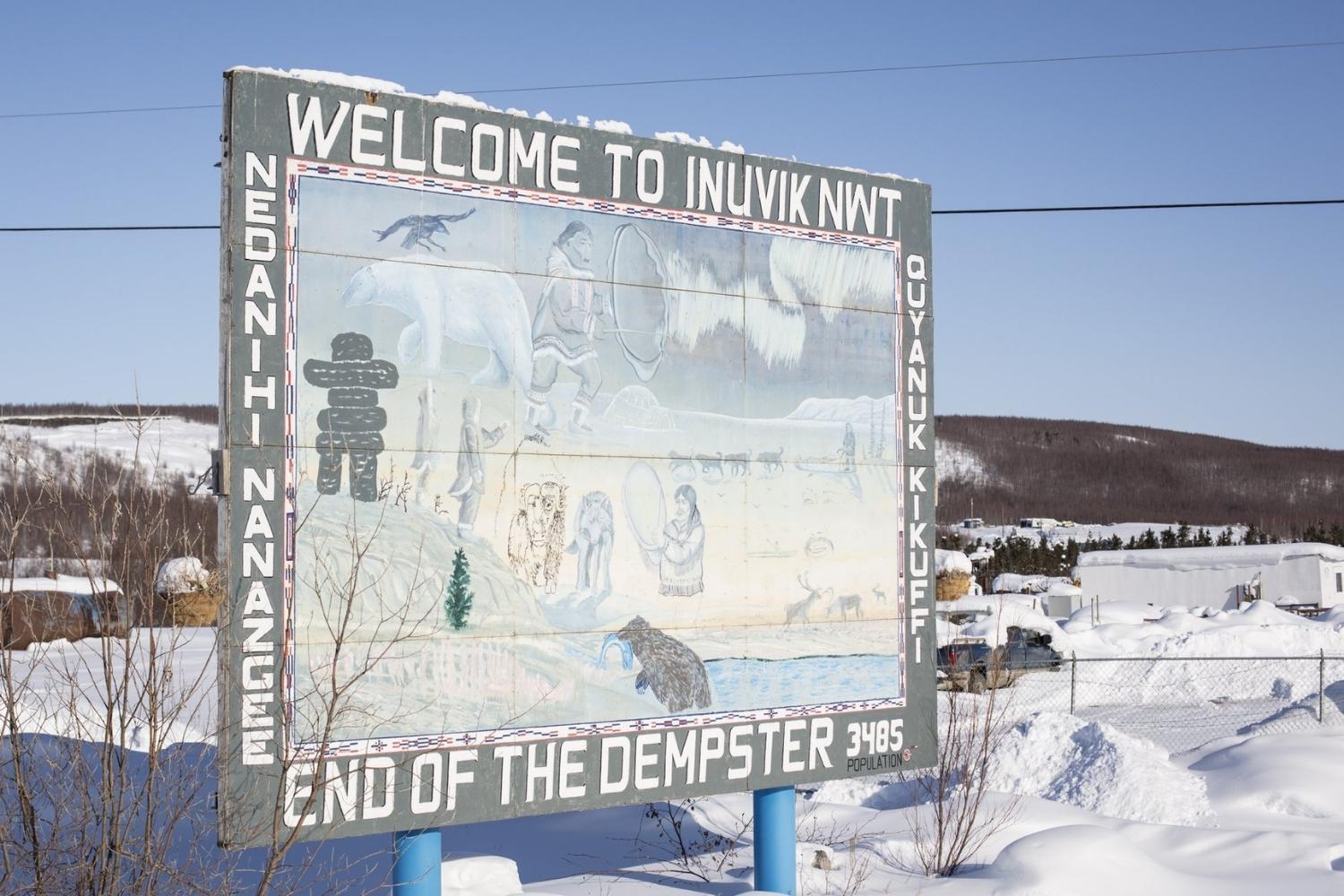 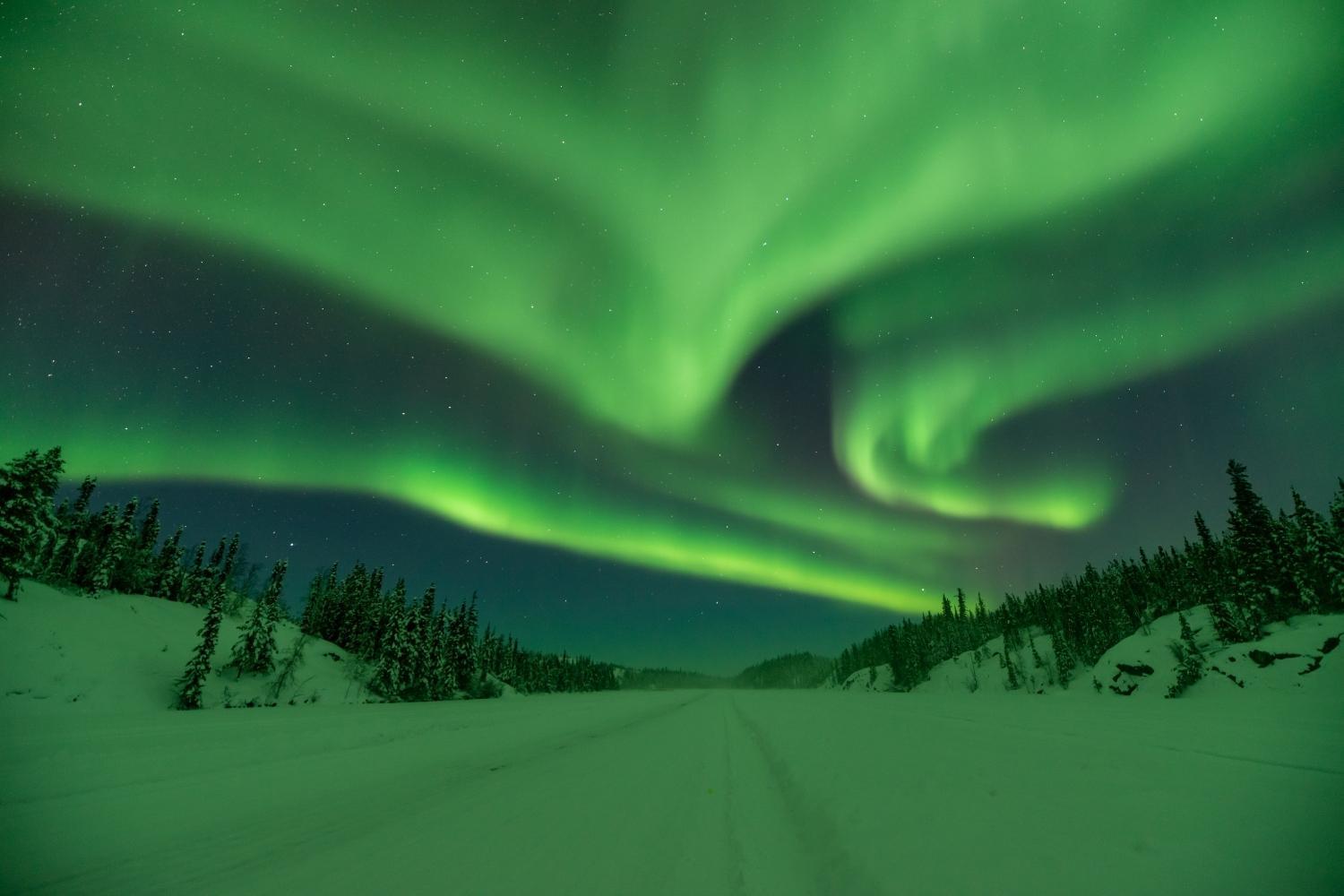 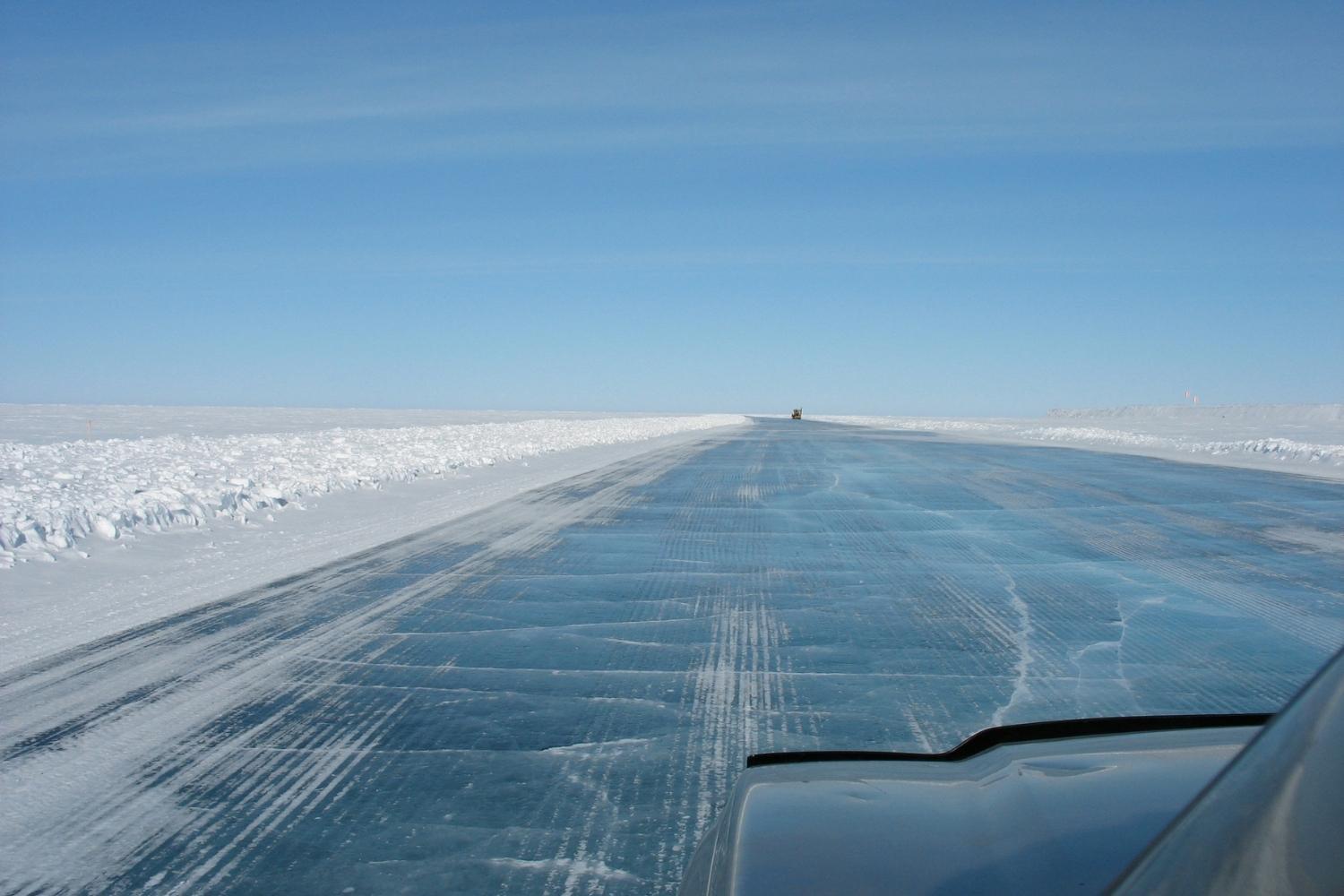 Join us as we travel overland from the Pacific to the Arctic, along snow covered highways and roadways built of ice along ancient wildlife corridors, and traditional trading routes of First Nations traders – later used by Klondike Gold Rush prospectors and North West Mounted Police patrolmen.

The route offers some of the greatest geographic diversity in the country; the Tombstone Mountains in the central Yukon are among the youngest mountain ranges in North America, while the low rolling Ogilvie’s with their naked spires were not glaciated during the last Ice Age, and thus are among the oldest. From there, the roadway will begin it’s descent into the impressive Mackenzie River Delta; 12th largest in the world, to arrive at Inuvik, known as the Place of Man. We will travel to the isolated community of Aklavik, once the region’s administrative centre, locals were slated (but refused) to be moved to Inuvik, on the Arctic coast, accessible only by a winter “ice-road” constructed out of the frozen ice of the Mackenzie River and the Arctic Ocean.  Exploring this remote village we will visit the grave of the Mad Trapper, the mysterious backwoods killer who led Mounties on one of Canada’s greatest manhunts. The tour finishes with an exciting excursions to the Inuvialuit village of Tuktoyaktuk, on the Arctic coast, where we learn about the local history and culture.

Day 1: Arrival Whitehorse
Meet and greet and transfer to your downtown hotel. En route, your guide will offer a city highlight tour that includes SS
Klondike National Historic Site, the Old Log Church and the Log Cabin Skyscraper. You’ll meet your fellow travellers and your guide will review the itinerary and your equipment at our group meeting this afternoon. The remainder of the afternoon and evening is free to explore the city and do any last minute shopping.

Day 2: Whitehorse to Dawson City
Prior to the late 1950’s, the only way to travel to Dawson City in summer was on a majestic paddlewheeler like the SS Klondike. Today, we’ll cover the 550km distance in just a few hours. Our route today takes us through the heart of the Yukon interior more or less along the Yukon River valley. We’ll stop for a coffee in the morning at Braeburn Lodge, famous for its massive cinnamon buns, then continue northbound on the Klondike Highway passing through several small native villages and settlements including, Carmacks, Pelly Crossing and Stewart Crossing. Near Carmacks, the road offers great views of famous Five Finger Rapids and about an hour outside of Dawson, we’ll stop at the Tintina Trench overlook for views of the expansive Yukon interior with the Ogilvie Mountains beyond that we’ll pass through tomorrow. Home to the world’s greatest Gold Rush, some 50,000 gold seekers arrived here in 1898 making Dawson City the largest town west of Winnipeg and North of Seattle (USA) at that time. The entire community is now a national historic site, and the romance of the Old West can be felt on every corner. Dawson’s unpaved streets and wooden boardwalks are still roamed by miners, hunters and trappers. After check-in, we’ll have a bite to eat, and then visit famous Diamond Tooth Gertie’s Casino. The raucous casino offers all the usual Vegas style games, including Texas Hold’em poker. On the way back to the hotel, we’ll keep an eye out for the Northern Lights, which can often be seen right over the town.

Day 3: Dawson City
Home to the world’s greatest Gold Rush, some 50,000 gold seekers arrived here in 1898 making Dawson City the largest town west of Winnipeg and North of Seattle (USA) at that time. The entire community is now a national historic site, and the romance of the Old West can be felt on every corner. Dawson’s unpaved streets and wooden boardwalks are still roamed by miners, hunters and trappers. Parks Canada has re-stored many of the original buildings including the Palace Grand Theatre, the Commissioner’s Residence and the cabins of Jack London and Robert Service’s cabin, among many others. We’ll travel up Bonanza Creek road to the actual claim where gold was discovered in 1896. Discovery Claim is located near the impressive Dredge #4 National Historic Site and we’ll stop for a photo here as well.
In the evening you will have the chance to discover Dawson City’s small but authentic bar scene and you will find many longtime residence who can tell you more tales of the far north.

Day 4: Dawson City to Eagle Plains
We’ll get an early start today. The Dempster is one of the truly great Canadian roadways. Completed only in the late 1970’s, the Dempster is still the only fully public road in North America to cross the Arctic Circle. Today’s drive is considered most scenic; Tombstone Territorial Park encompasses the jagged peaks to the West that give the park its name and further along, the Ogilvie Mountains offer superb scenery and stunning vistas. Wildlife is often spotted along the roadsides, so keep a good watch for foxes, the occasional wolf and caribou. We’ll stop for a picnic lunch at a creek-side campground, where gray-jay’s, or ‘camp-robbers’ as they’re known locally will keep us company always happy to help with leftovers. As we arrive at Eagle Plains in the late afternoon/early evening, the modest hotel, fuel station, and highway maintenance station – the only civilization for approximately 300km in either direction – feels like an oasis!

Day 5: Eagle Plains to Inuvik
Departing Eagle Plains, our first stop is at the Arctic Circle crossing, where we’ll enjoy a celebratory glass of champagne to commemorate this special occasion. After crossing a mountain range and two rivers (the Richardson’s and the Mackenzie and Peel Rivers), we’ll visit the First Nations community of Fort MacPherson. The famed Lost Patrol, found after they perished by RNWMP Corporal Dempster – for whom the highway is named – is laid to rest here. A former Hudson Bay trading post, some native elders still wonder the village in Hudson Bay print dresses. Inuvik is a relatively young community with an ancient history. The Canadian government commissioned the building of the town in the 1950’s when it became apparent that the nearby traditional village of Aklavik, was slowly sinking into the delta. Inuvialuit people
(Inuit, once referred to pejoratively as Eskimos) were also moved down from various points on the Arctic coast. Appropriately, the name Inuvik means Place of Man in the Inuvialuit language. We’ll take a short tour of the village on the way to hotel and you’ll have time to explore the town on foot in the evening.

Day 6: Inuvik – Aklavik – Tuktoyaktuk
Today will be memorable; we’ll travel by ice-road across the expansive Mackenzie River delta towards the Arctic coast. We will travel to the isolated community of Aklavik, once the region’s administrative centre, locals were slated to be moved to Inuvik, but refused – hence their motto,“Never say die.”, on the Arctic coast, accessible only by a winter “ice-road” constructed out of the frozen ice of the Mackenzie River and the Arctic Ocean. Exploring this remote village we will visit the grave of the Mad Trapper, the mysterious backwoods killer who led Mounties on one of Canada’s greatest manhunts. At the rivers entrance into the Arctic Ocean, the road turns northeast and travels along
the coastline of Arctic Ocean toward the village of “Tuk” as it is known by residents. Not far from town, you’ll see the first of several ‘pingos’. These are mountains literally made of ice; heaved-up season after season with the annual freeze and thaw. The tallest is over 100m! We will be met by local guides who will take us on a tour of their unique village. Stops along the way include the historic Lady of Lourdes schooner and some of Tuk’s famous community buildings such as sod houses, churches and the community “freezer”; a hollowed out section of permafrost located deep underground. You’ll also see the Northern Early Warning site (formerly DEW Line) and even get a chance to dip your toe in the Arctic Ocean! You’ll also be invited to a local resident’s home for a glimpse at home-life in a northern community.

Day 7: Tuktoyaktuk to Inuvik
Return to Inuvik via the ice road. Afternoon and evening free for optional sightseeing and tours.