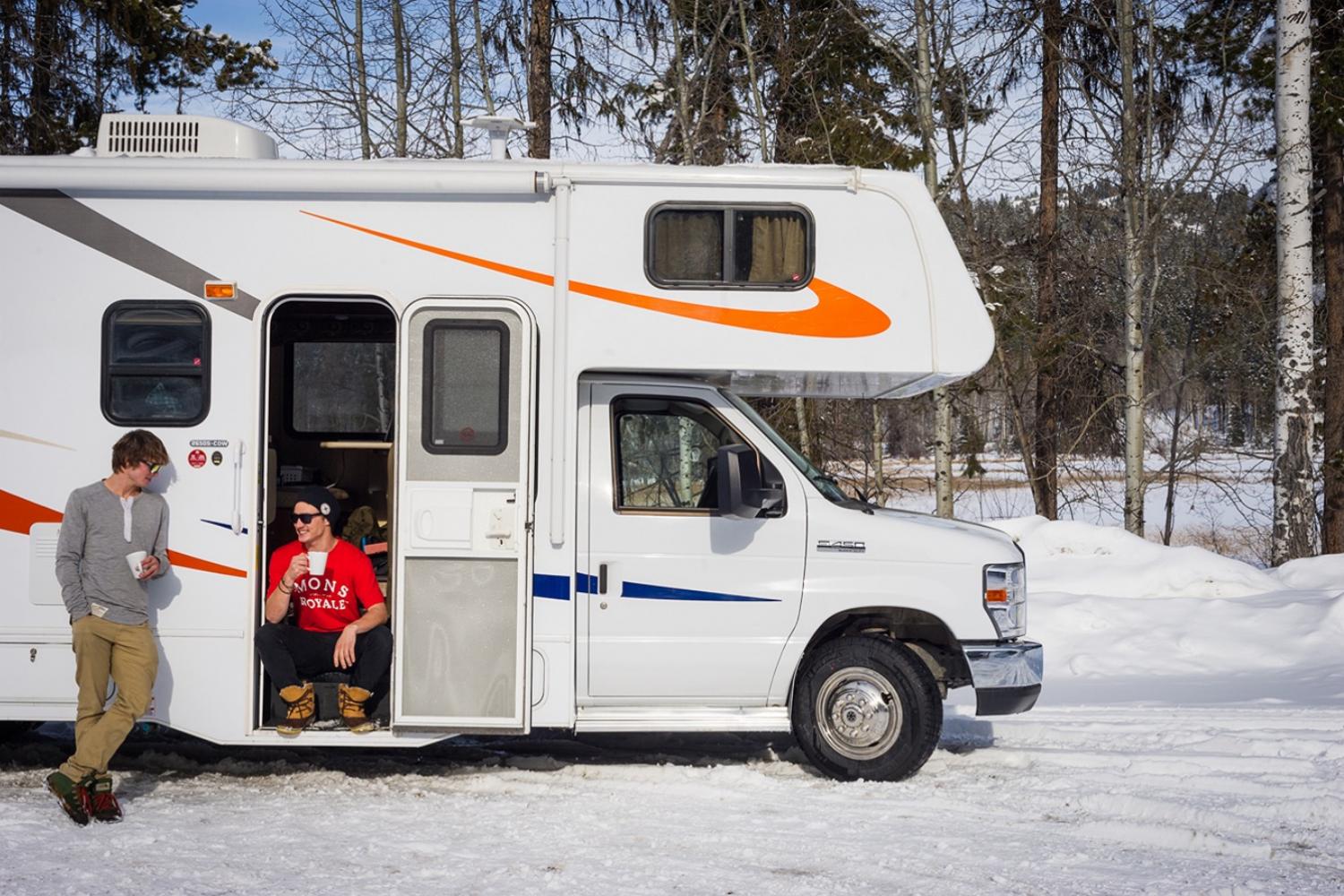 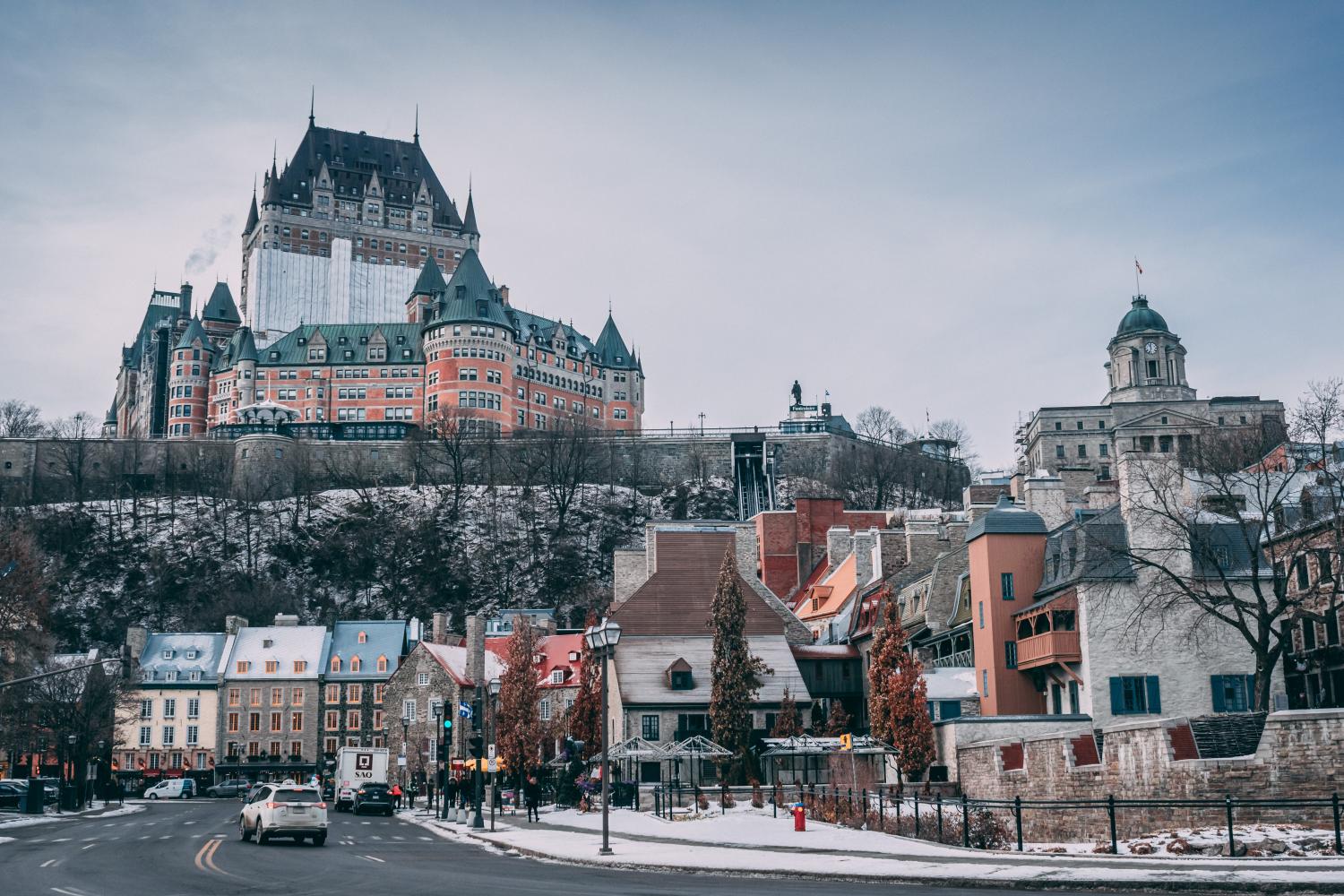 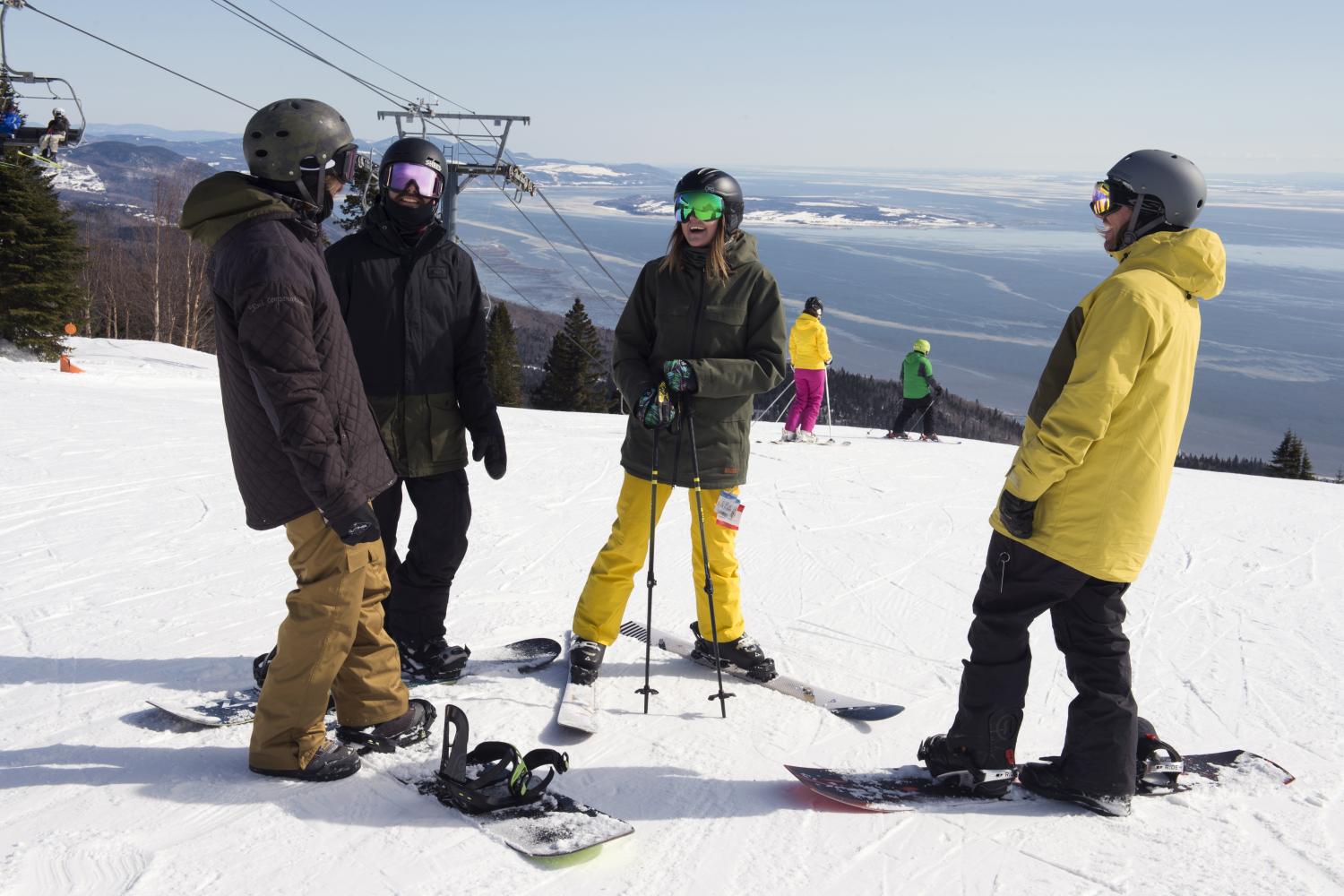 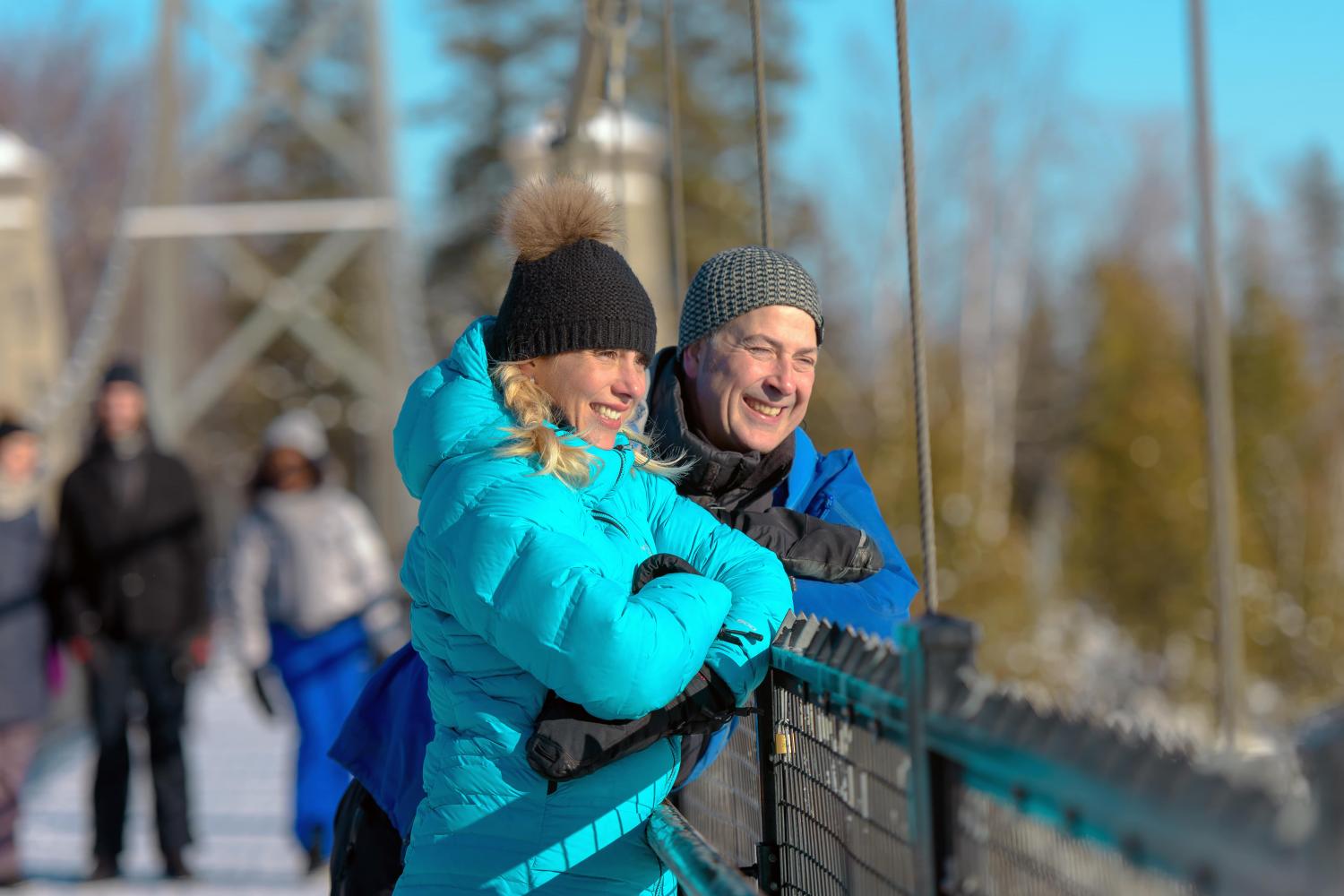 Ski Quebec at your own pace - as you cruise through breathtaking landscapes in a Modern RV!

Tour Québec’s stunning ski destinations with ease in a modern and comfortable RV. Travel between destinations without having to unpack and, after a day of skiing and exploring, come home to the comfort of your own private space. This route is paced to be leisurely and restful while also exploring some of the best ski hills in the province — many of which are within easy reach of Montreal. You’ll experience the scenic beauty of Québec as you drive and the stunning mountains at each destination. This package is perfect for ski enthusiasts with a sense of adventure!

Begin your adventure with a drive from Montreal to Mont Tremblant. If you are a cross-country skier, you may find it worthwhile to stop at St. Jerome and ski along the track bed of the former railway line known as “Le P’tit Train du Nord”. This 200 km trail is now a “linear park” and you can ski along the trail between railroad stations. The trail begins at St. Jerome and ends at Mont Laurier, north of Mont Tremblant. There is a shuttle service available in the main centres along the route that will take you back to where you parked your RV.

Please note: The railroad stations have been renovated and now mostly serve as restaurants. The further north you ski on this line, the fewer services are available beside the trail.

Mont-Tremblant is a well-known resort with runs for every ski level. Anchored by a picturesque village, it provides ample opportunity for shopping, dining and nightlife.

This venue draws celebrities from all over the world. Mont-Tremblant is the highest peak in the Laurentian Mountains, with a vertical drop of over 2,000 ft. The village is only an hour and a half from Montreal.

The Versant Soleil, which means "sunny slope", opened in the fall of 1999. This side of the mountain has a vertical drop of 1905 ft. and offers plenty of challenging runs.

If you travelled directly from Montreal to Mont-Tremblant, you will have an extra day to spend on the many runs with varying levels of skill. If you want to take in some of the sights and activities of the smaller towns that lie between Mont Tremblant and Québec City, you would plan to leave Mont Tremblant early in the afternoon of Day 2.

Ste-Agathe-des-Monts, Val David or Ste. Adèle are all long-time settlements, with loads of history and activities along your drive to Quebec City. You will also drive through Trois-Riviéres - one of the major commercial ports in Québec.

Québec City is one of the oldest cities in North America. The architecture is reminiscent of 17th Century Europe and the streets are still paved in cobblestones. You're sure to enjoy your time discovering this beautiful city.

Only 20 minutes away from downtown Quebec City, Stoneham Mountain Resort offers skiers and snowboarders a choice of 42 trails on three mountains, an Olympic halfpipe and three snow parks. One of the largest night-skiing domains, the great ambience of the Quatre-Foyers Bar and the delicious food of the Feu-Follet Restaurant contribute to Stoneham's unique reputation.

You can also ski the cross-country trails around Battlefields Park in Quebec City. Along with skiing at the Park, guided tours are available and are recommended. Ice-climbers can head to Montmorency Falls, just northeast of Quebec City where the Montmorency River joins the St. Lawrence River.

After your ski day, drive the short distance to Mont-Sainte-Anne. This extraordinary mountain is renowned for impeccable snow conditions.

The skiable terrain includes 71 trails and 4 snow parks spread across 3 sides of the mountain. After sundown, 19 trails remain floodlit, which makes Mont-Sainte-Anne the highest vertical drop for night skiing in the country.

Enjoy skiing at Mont-Sainte-Anne. You will find quality rental and equipment maintenance, restaurants all around the mountain and many different activities, in addition to the wonderful skiing and XC skiing terrain.

With quality installations and trails for all levels, this mountain will soon become a favourite! Discover all services and activities, schedules, fares and everything you need for a great visit.

Only an hour north from Mont-Sainte-Anne, in the Charlevoix region, is Le Massif Ski Resort. The view is spectacular - you will see the St. Lawrence River from the high points of this resort, as many of the runs have a vantage point, giving you amazing vistas to take in. It'll seem as if the water lapping at the shoreline lies directly below the base of the mountain.

You'll definitely get a good view of commercial tanker ships going up and down the St. Lawrence River as you plunge down the slopes. This mountain is the highest in Québec and one of the most popular in eastern North America. It has a vertical drop of more than 2,500 ft. with the longest run taking you along 2.36 miles of trail in deep snow. Le Massif also has unlimited runs for snowboarding.

Make sure you bring a good pair of sunglasses, as the sun shines brightly and creates a sparkle on the bright blue water off the St. Lawrence River. There is also a strong glare coming off of the snow when the sun is out.

Charlevoix is also a great region for cross-country skiing. There is usually plenty of snow here and many kilometres of trails that require beginner to intermediate skill levels. The trails begin very close to Quebec City and go on for long distances, both close to the banks of the St. Lawrence River and points north and northeast. Where cross-country skiing is possible, you will also find dog-sledding, snowmobiling and snowshoeing.

Stay one more day for skiing at Le Massif.

If you don't feel like skiing, spend the day relaxing or go on a day-trip to some neighbouring towns. You might also want to explore the small towns within a few hours drive of Le Massif, including La Malbaie and Baie-Saint-Paul. Or, you can venture as far as Tadoussac, where the Saguenay River meets the St Lawrence.

Today’s travels take you to Mont Orford. There is a ferry that will take you across the St. Lawrence River from St-Simeon to Rivière du Loup. Some of these ferries only go to the smaller islands, but most will make a trip to the south shore and back. You may prefer to drive around a few of the islands that lie in the middle of the St. Lawrence on your way to the south side.

Drive along Highway 112 from Magog to reach your destination at Mont Orford. This ski area is owned by the province of Québec and covers three different peaks, Mont Orford, Mont Giroux, and Mont Alfred DesRochers. All these mountains are more than 2,000 feet high and the runs are interconnected giving skiers an abundance of choice. The resort offers dining, ski schools, and child care. There is also a snow park and a half-pipe for snowboarders at this resort, not to mention ice-climbing, sleigh rides, snowshoeing and cross-country skiing.

Orford is in easy reach of Montreal, with about two hours of driving time.

Take a day to tour around the city of Montreal before ending your tour of Québec. Visit the Centre d'histoire de Montréal facing the Place D'Youville. You can walk around on the rooftop and see Vieux-Montréal from a higher vantage point and learn about the city's culture and history. Or perhaps you're up to climbing up to the base of the cross at the top of Mont-Royal -- a local favourite.

There are many restaurants, bistros and nightclubs throughout the city. The downtown district has countless establishments to choose from; there are many more in the Underground City (a plus in inclement weather), as well as in the Quartier Latin.

5 Days
Private: Summer Stay in Charlevoix
With stunning landscapes and views, the region of Charlevoix owes its unique relief to the impact of a meteorite that fell 400 million years ago and sculpted a 54 km crater with the Mont des Éboulements in its center. Whether during the hot summer days or when the fall vibrant colours adorn the trees, the region proposes a wide range of activities!
More Info
3 Days
from $725 CAD
The Saguenay Fjord by Kayak
Come live an unforgettable experience with the 3-day expedition that will take you through the wildest part of the Saguenay Fjord, the Saguenay-St. Lawrence Marine Park. You’ll enjoy an outdoor and gastronomic adventure, an incomparable experience. During this expedition, you will discover the majestic 400-meter capes of the Saguenay Fjord, its islands and you may even see its belugas. Get ready to fall in love with the fjord and its legends, relax in a peaceful haven surrounded by wild, unspoiled nature, and meet its incredible fauna such as seals, belugas, and more!
More Info
2 Hours
Private: Via Ferrata Canyon Sainte-Anne Experience
Secure family fun! You are going to experience Canadian nature in a new unexpected way! Experience the Via Ferrata by clipping into a cable system and following a scenic circuit across rock formations down to the Giant’s Pothole and alongside a waterfall. No outdoor experience or high level of fitness is necessary. This activity is family friendly for children and seniors. The Via Ferrata packages are available from early May through mid-October and you can enjoy the experience year round!
More Info