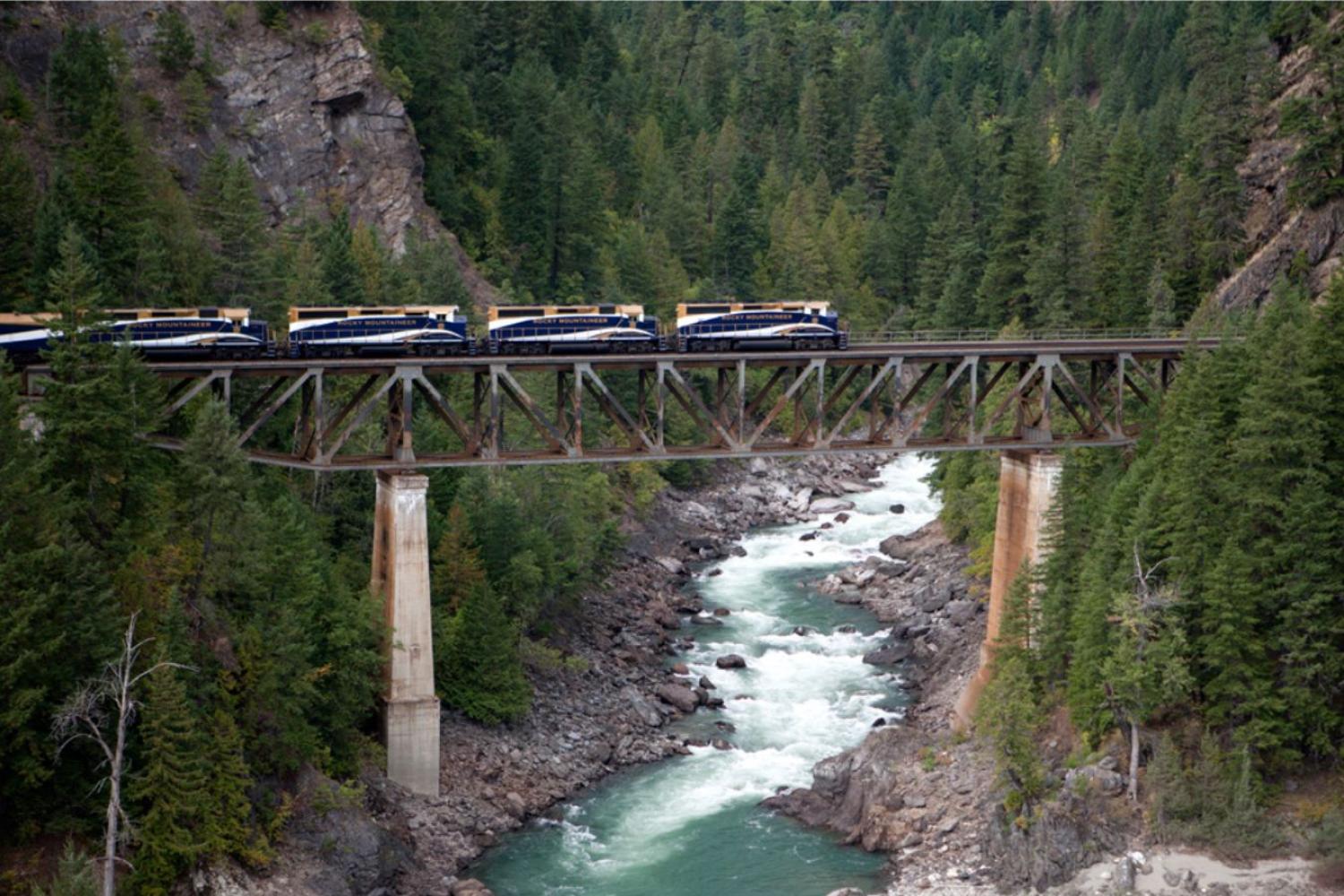 Journey Through The Clouds

Pass by Mount Robson, the highest peak in the Canadian Rockies on a route only accessible by rail

Mountains stretch up to the sky in every direction on this 2-day jaw-dropping rail excursion between Vancouver and Jasper National Park. You’ll have non-stop stunning panoramic views of the changing landscape as you cross the Continental Divide in complete luxury aboard the Rocky Mountaineer.

With comfortable seating, top-notch service, chef-prepared meals and stunning scenery, it’s no wonder the Rocky Mountaineer was named the world’s best luxury train by the prestigious World Travel Awards. The Rocky Mountaineer only travels during the day with hotel stays at night, meaning you won’t miss a second of the scenic beauty of British Columbia

SilverLeaf: See the Rocky Mountains in style INCREDIBLE VIEWS. IMPECCABLE SERVICE. Our SilverLeaf service level gives you everything you need and more to experience the majesty of the Rocky Mountains in luxury: panoramic views, delicious meals and beverages brought right to your seat, friendly Hosts and complimentary baggage transfers. And miles and miles of memories.

GoldLeaf: The Height of Luxury FIVE-STAR COMFORT MEETS FIVE-STAR VIEWS With our GoldLeaf Service, indulge your senses with gourmet meals prepared by Executive Chefs, and expansive views through the panoramic windows of a bi-level glass dome coach to the Canadian Rockies.

The Rocky Mountaineer features three unique rail excursions through the Canadian Rockies. Take a look at our First Passage to the West and Rainforest to Goldrush excursions for more itinerary options. Please note that each itinerary can also be done in reverse.

The following itinerary can be customized to add on nights in Vancouver, Kamloops and Jasper, as well as additional experiences in the Rocky Mountains. The possibilities for customization are endless so please reach out to us with any special requests or for travel inspiration.

Wave goodbye to the glistening ocean waters of Vancouver as you head into the picturesque Fraser Valley. Here you’ll have your first taste of the top-notch cuisine with a delicious breakfast, served either at your seat (SilverLeaf service) or in the scenic dining car (GoldLeaf service).

As the train crosses the peaks of the Coast and Cascade Mountains, you’ll witness a dramatic change in scenery. You’ll pass over the famous Hell’s Gate, an abrupt narrowing of the Fraser River that creates some spectacular rushing whitewater rapids. Listen to entertaining stories about the region as you enjoy a three-course lunch freshly prepared by the onboard chefs and watch as the lush green fields of the Fraser Valley give way to the stark landscape of the British Columbia interior.

Your full day on the train ends in Kamloops where you will enjoy an included night of accommodation in a hotel and have time to explore the town.

Unlike its sister train that follows the first Canadian rail route to Banff, this Rocky Mountaineer excursion departs Kamloops and heads north along the second of Canada’s two trans-continental railways. Commonly known as the Yellowhead route, much of this rail line goes along a route that has no roads, making it a landscape that can only be viewed by train.

Eat a gourmet breakfast as you wind your way lakeside through the Shuswap region, then enjoy an exclusive view of Pyramid Falls from a vantage point only accessible by rail. You’ll soon be swept up in the sheer beauty of the Rocky Mountains as the train slowly ascends towards its destination in Jasper National Park.

With huge panoramic windows, you won’t miss a moment of the scenery. Look out for wildlife along the way – you might even spot a grizzly. A gourmet lunch, created using local ingredients, is served alongside stories about the railway and the landmarks along the way. Before entering the grand Jasper National Park, you’ll pass by stunning Mount Robson, the tallest peak in the Canadian Rockies at 3,954 metres.

Your day ends in the lovely mountain town of Jasper.

Starting from 2 Days, 1 Night
First Passage To The West
Cross the Continental Divide in complete luxury aboard the Rocky Mountaineer’s classic ‘First Passage to the West’ rail excursion. You’ll wind through mountain passes, dramatic steep canyons walls and dense Canadian forests as you make your way between coastal Vancouver and Banff National Park. Enjoy chef-prepared cuisine, comfortable seating and spectacular Canadian mountain scenery. The Rocky Mountaineer only travels during the day, with hotel stays at night, making this 2-day journey a sightseer’s delight
More Info
5 Days, 4 Nights
from $1307 CAD
The Ultimate Rail Journey Aboard the Canadian
Step aboard VIA Rail’s legendary Canadian and discover the diverse landscapes, stunning scenery and mesmerizing beauty of central and western Canada. On this classic 4-night train journey, you’ll zip past boreal forests, watch the sun set over the endless horizon of the Prairies and wake up to the wonder of the Canadian Rockies. With huge windows, comfy lounges and a dining experience that rivals some of the country’s best restaurants, all you’ll have to do is sit back and enjoy the view
More Info
Starting from 3 Days, 2 Nights
Rainforest to Gold Rush
Make your way past coastal fjords, through lush temperate rainforests and over spectacular mountain passes on a 3-day train trip between Vancouver and Jasper, with overnight stops in Whistler and Quesnel. This is the longest journey offered by the award-winning Rocky Mountaineer and heads along some of the lesser-explored rail lines in the British Columbia wilderness. Take in unbeatable views of Howe Sound, delight in the charms of Whistler, view the gold-flecked canyons along the historic gold rush route and be wowed as the spectacular Canadian Rockies come into view. Travelling only by day and sleeping in hotels at night means you won’t m
More Info